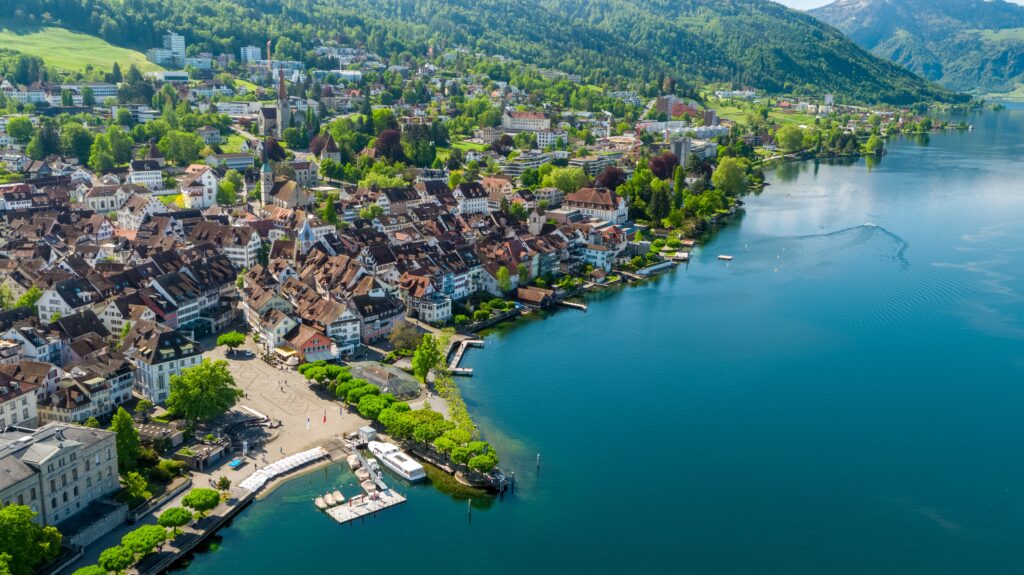 The beautiful town on the shore of the Lake of Zug and at the foot of the “Zugerberg” with a view of the Rigi and Pilatus is also called “Chriesi-Stadt” which means town of cherries. Why? The town is famous for its blossoming cherry trees, and the famous “Zuger Kirschtorte” and cherry liquor are still culinary specialties of the town today. The “Zuger Kirschtorte” – a cake which contains cherry liquor – was even crowned a UNESCO World Heritage Site in 2011, and since 2013 the liquor has even been protected as a trademark.

Zug convinces with many historical buildings and sights. Starting with Zug Castle on the edge of Zug’s old town, which was occupied by the Kyburgs and Habsburgs in the Middle Ages. As a landmark of the city of Zug, it has been a museum since 1983. The origins of the castle can be traced back to the 12th century. It once belonged to the Habsburgs, who mortgaged it to the Kyburgs for a time, and after Zug joined the Confederation of Switzerland it was privately owned by many wealthy families of Zug.

The 52 meter high Zytturm is also one of Zug’s landmarks. It is located directly on Kolinplatz and used to be a fire watch tower. It was built in the 13th century and the clock was installed in 1574. On the eastern side of the tower, an astronomical clock is installed under the clock face. This shows the day of the week with the arrow, the phase of the moon with the crescent moon, the month with the sun and whether the year is a leap year with the letter S. In addition, the eight original cantons of the old Swiss Confederation are painted under the clock. The Zytturm is part of the beautiful old town of Zug, which is also worth a visit. Here you will find many beautiful historic squares, such as the Landsgemeindeplatz, the Kolinplatz with the Kolin fountain or the Hirschenplatz, which invite you to linger. Of course, the beautiful lake promenade with the lakeside path is also worth a trip. There is also a fountain here.

Since the city of Zug was surrounded by walls and towers in the 15th century, many of these monuments have become sights today. This includes the Powder Tower, which was built between 1522 and 1532 and used to store about 3000 pounds of gunpowder. In the course of the town’s history, the tower was once struck by lightning in 1684, but fortunately it did not cause any damage, as the walls of the tower are a full 2.7 meters thick. If you wish, you can rent the lower part of the tower for events.

As a backdrop to the former fish market, the town hall rises as another landmark of Zug. It is built in late gothic style around 1505 and inside the building you will find the famous Gothic Hall and the former courtroom, which is now used as a meeting room for the town council. The town hall can be visited as part of the guided tour of the town. The church of St. Oswald, which together with the church of St. Michael is one of the two famous churches in the town, dates from the same period. St. Oswald’s Church is the only preserved large late gothic building in central Switzerland and, along with Bern Cathedral, is considered the most beautiful church of this period. Particularly worth seeing inside is the baroque bossard organ as well as the wall paintings and the high altar. By the way, with the St. Verena and the Guardian Angel Chapel, Zug has other great church buildings that invite you to visit. The “Liebfrauen”-Chapel is also a sight to see. It was first mentioned in documents in 1266 and is therefore considered the oldest church in the city. The cycle of the Virgin Mary on the ceiling, painted by the baroque painter Johannes Brandenberg, is particularly worth seeing.

Zug also has many historic fountains, such as the Kolin Fountain, the Hecht Fountain, Greta Schell Fountain, the Schwarmurer Fountain and the Oswald Fountain, which beautify the city. The Kolin Fountain, built around 1540, with the figure on the fountain represents a representative of the Kolin family, who held the office of standard bearer. The Pike Fountain was built in 1620 in order to wash the freshly caught fish at the fish market and therefore has as a fountain figure a boy holding a pike in his arms. The Schwarzmurerbrunnen was built in 1478 to provide drinking water for the people who arrived new in the town.

If you are having any questions, please feel free to ask.

Drop Us a Line